IBM Marketing: A #NewWaytoWork Returns to an Old Way – Lessons to be Learned

In September of 2016 IBM hired their first CMO with experience in the startup world as well as in big business. Her name is Michelle Peluso. Prior to joining IBM she was the CEO of Gilt, which recently sold to Hudson Bay, owner of Saks Fifth Avenue. Michelle was the former Global Consumer Chief Marketing and Internet Officer at Citi. In addition, she was CEO of Travelocity. She received her MA in Philosophy, Politics and Economics from Pembroke College at Oxford University, where she was a Thoroun Scholar, and received her BA from the University of Pennsylvania’s Wharton School of Business. Very smart, experienced and exceptional woman! I worked with Michelle and adore her. She is someone I encourage my girls to look up to, but some see a recent shift at IBM as Michelle’s “Marissa Mayer moment.”

Another strong, smart woman, Marissa Mayer took over at Yahoo at a time that looked, well, very bleak. She brought much hope to a desperate company. Early in her tenure Ms. Mayer built a nursery in her office to accommodate her son and a dedicated working schedule. Around that same time, she also discontinued a common practice at Yahoo of working from home. According to statements she wanted to build a cohesive culture and comradery that she felt was missing within the organization. Many surmised that it was a sneaky way to restructure the company, causing people to quit without the need to pay out severance.

In February of this year, news broke that IBM was shifting many marketing employees to offices, ending remote workers, smaller offices, and individuals working from alternate locations will be moved to six key offices with diverse creative teams in Atlanta, Raleigh, Austin, Boston, San Francisco, and New York. The objective, according to a memo from Michelle is to create “really creative and inspiring locations.” Immediately speculation internal and external to the company began to swirl around reasons for this move. Similar to Yahoo, fingers began pointing at this as a means of reducing headcount without calling it that. IBM, even with statements that they are hiring, has been reducing headcount for years.

There is a lot in common between the Yahoo example and IBM. The first question I ponder is if these changes were made by a male leader, would we even hear about it? The IBM story has been ongoing for months, and the Yahoo example for years and neither show signs of letting up anytime soon. I am sure many would respond that this has nothing to do with a female leader, but why do we not talk about similar happenings at Best Buy that occurred around the same time as Yahoo? Is it that some people believe female leaders should be more caring of people and focus on the work/life balance, and male leaders more on the cold bottom line? I think it might have less to do with male/female and more to do with a view that each person has entrenched. Some firmly view work from home as the future, while others firmly believe those working from home do not actually work. When the view is expressed that is just like the one we have, we will immediately jump in to say “YES! See I was correct!” or if the view expressed is opposite we take it as someone telling us our view was wrong and we throw up our defenses. The reality is the answer to all these things is somewhere in the middle (and will differ from company to company), we just have to be smart about listening to the other views and learning from them.

“Innovative” IBM Kills Working from Home” by Bruce Kasanoff looks at the blanket decision of the company as opposed to IBM working as a nimble, more innovative company would. Needless to say this caused great debate within many circles. There are a number of points worth exploring further. First why is the finger pointing at Michelle Peluso at IBM instead of others within leadership at IBM? That was my first reaction, particularly as I know Michelle. She has earned the benefit of the doubt in my mind. With that said, I get that she may not have earned this from others, and I can respect that (feels like the Seinfeld statement “not that there is anything wrong with that!”)! If we dig back to some of the February articles we learn that this was not just marketing moving to this co-location model but many other departments at IBM too. Moreover it all started well before Michelle joined IBM, and unfortunately it will continue. Why didn’t we hear of the shifts in other departments? Why the focus solely on IBM marketing? Looks like there are many challenges within IBM at play here. Other IBM departments that made this change are IBM’s design department, security department, procurement department, large parts of the IT department, and teams that work on Watson, Watson Health, Watson Internet of Things, and Cloud Development.

So why does this story continue to have legs for IBM? The company has provided very little information other than internal memos that leaked. The first key reason is the speculation is mainly coming from inside the company, not out. Stories are filled with anonymous employees discussing this. The company has not been seen as forthright regarding the reasons for this shift which perpetuates the belief that this decision is about reducing headcount not creating culture as internal memo’s would suggest. Another key problem is that parts of the company have been producing and recommending to other businesses #NewWaystoWork, but their own actions state the #IBMwasWrong #OldWaystoWorkisBetter. Now that is some good marketing!

The key for dealing with situations like this is not this “old school” spin style that the company has been taking. Keeping silent with your head under the pillow will not make this go away. In an era filled with speed, “fake news,” and distrust of large businesses, the target on IBM has never been bigger and conducting business in this manner just makes the target easier to hit. The key way for dealing with situations like this is actually being clear as to the real reasons behind this change, and examples as to why it is necessary. Until this happens, this story will continue to have legs. I would also suggest that the CEO Ginni Rometty needs to be the one to “own” this. She is allowing Michelle’s name to be damaged, but clearly the same change was implemented in many departments out of Michelle’s control before Michelle even came to IBM. In situations like this, leaders step up and lead!

My assumption is that the company is seeking to redefine a culture that has been lacking. For years the company has created vastly different cultures throughout the organization. They have really been struggling to find their collective identity. Silos, regardless of the internal collaboration software created by IBM or the consulting services concentrating on #newwaystowork, have thrived. The company has not lived up to what it preaches. It never has. The blue/white collared shirts are still around and there is conflict with the new jeans wearing crew. They fight for purpose, budget and long-term success. If you have ever dealt with IBM salespeople, you have seen this breakdown of culture and purpose as you hear varied brand messages. It has definitely been “Big Blue.”

This type of transition is much bigger than messaging; it centers more on action. I am not certain that the company is up for it, but I will be cheering people like Michelle on as they try to make the transition. Personally, I think IBM would be much better off splitting into separate business with leaders like Michelle having deeper responsibility over concentrated areas. This type of change would better define these separate entities, allowing differing cultures, delivering better results for Customers, and creating more transparency for the investing public. Smaller can be much better!

This was originally posted in LinkedIn Pulse 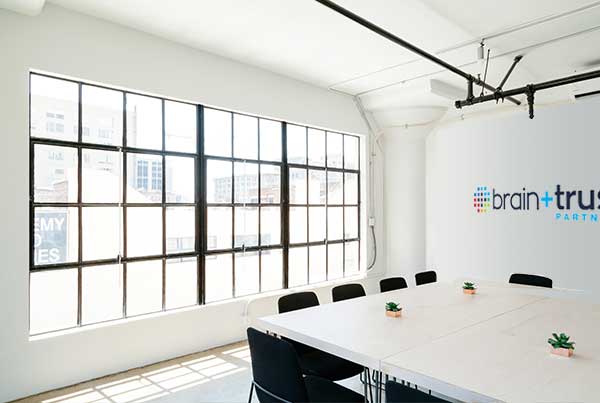 Meet Our Advisory Board

Meet Our Advisory Board